May 21 Posted by Denise Witman in Hypertension 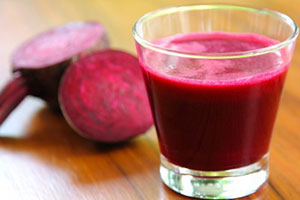 My mother was recently diagnosed with high Blood Pressure (BP). She talked to her doctor about the best ways to help control her high BP. The doctor prescribed a blood pressure medication and recommended she should eat more fruits and vegetables in addition to adding 30 minutes of exercise to her daily routine.

I was happy that the doctor recommended a healthy lifestyle to her in addition to the medication. I wouldn't call myself a health nut, maybe an enthusiast – which is why I liked the idea of alternatives for her. Recently, I read a study in the American Heart Association journal Hypertension, about how drinking a cup (250ml) of beetroot juice a day could help lower High BP.

Beetroot juice contains an inorganic nitrate (NO3−) that, in small-scale clinical studies, demonstrated that if orally-ingested, has been linked to underlying health benefits and effects of a healthy diet. The participants of this study showed that drinking beetroot juice decreased their BP an average of 10mmHg. The study said that it was most pronounced 3-6 hours after drinking the juice, but that effects could still be present 24 hours later. Currently, daily elevation of this dietary nitrate intake can provide sustained elevations in nitrites within the body and therefore decreases the subjects BP; however long-term effects are still unknown.

Armed with this new found knowledge, I went to my mother and told her that I wanted her to try this, just to see if it would work for her. But how was she supposed to monitor her BP to see if the beetroot juice was working? She doesn't own a home BP monitor so the next logical choice was a convenient BP kiosk. Fortunately for her, there is a BP kiosk at the gym she joined. Before every workout she takes her BP and writes it down in a journal. With information I knew from an earlier Blog post, 3 Things to Consider When Measuring Your BP at a Kiosk, I made sure she took a few BP measurements and waited a few minutes after she sat down before she took her BP.

So how's my mother doing? She's monitoring her BP on a weekly basis, she honestly doesn't like the beetroot juice, but she continues to work on lowering her BP on a daily basis. Good job mom!